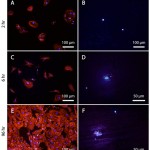 Zinc (Zn) and its alloys have been introduced by our team as a new class of biodegradable metals with potential application for making biodegradable vascular stents. Although our previous feasibility in vivo study suggested biocompatibility of Zn –based implants in vascular environments, a thorough understanding of how Zn and its ions affect surrounding cells was lacking. In our comparative study published in the ACS Biomaterials Science and Engineering journal in the article entitled “In Vitro Cytotoxicity, Adhesion, and Proliferation of Human Vascular Cells Exposed to Zinc,” three vascular cell types were used including human endothelial cells (HAEC), human aortic smooth muscle cells (AoSMC), and human dermal fibroblasts (hDF), to advance understanding of Zn-cell interactions. Aqueous cytotoxicity using a Zn ion insult assay resulted in LD50 values of 50 μM for hDF, 70 μM for AoSMC, and 265 μM for HAEC. Direct cell contact with the metallic Zn surface resulted initially in cell attachment, but was quickly followed by cell death. After modification of the Zn surface using a layer of gelatin—intended to mimic a protein layer seen in vivo—the cells were able to attach and proliferate on the Zn surface. Further experiments demonstrated a Zn dose-dependent effect on cell spreading and migration, suggesting that both adhesion and cell mobility may be hindered by free Zn ions.
This publication is the result of our collaboration with Prof. Feng Zhao’s team of the Department of Biomedical Engineering, and this work was led by Dr. Emily Shearier who graduated with her PhD degree in December 2015.