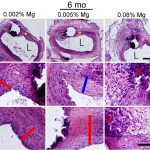 Our new paper entitled In Vitro Corrosion and in Vivo Response to Zinc Implants with Electropolished and Anodized Surfaces has been published in the ACS Applied Materials & Interfaces journal. Roger Guillory, PhD candidate, and Prof. Jeremy Goldman from Biomedical Engineering led this project. In this study, pure zinc samples were electropolished (EP) and anodized (AD) to engineer oxide films with distinctive physical and degradation characteristics, as determined by potentiodynamic polarization, electrochemical impedance spectroscopy and static immersion tests. The samples were then implanted within the aortic lumen of adult Sprague Dawley rats to determine the influence of surface engineering on biocompatibility responses to Zn implants. It was found that in vitro corrosion produced a porous corrosion layer for the EP samples and a densified layer on the AD samples. The AD material was more resistant to corrosion, while localized corrosion and pitting was seen on the EP surface. Interestingly, the increased variability from localized corrosion due to surface film character translated directly to the in vivo performance, where 100% of the AD implants but only 44% of the EP implants met the biocompatibility benchmarks. Overall, the results suggest that oxide films on degradable zinc critically affect early neointimal progression and overall success of degradable Zn materials.