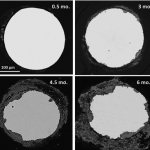 Zinc (Zn) has recently been introduced as a promising new metal candidate for biodegradable vascular stent applications with a favorable degradation rate and biocompatibility. Corrosion resistant metal stents are often coated with drug-eluting polymer layers to inhibit harmful biological responses. In our new paper entitled “Effect of PLLA Coating on Corrosion and Biocompatibility of Zinc in Vascular Environment” and published in Surface Innovations, we investigated the interaction between biodegradable zinc metal with a conventional biodegradable polymer coating. Zn wire with a diameter of 0.25 mm was surface modified using 3-(trimethoxysilyl) propyl methacrylate (MPS) and then coated with a 1-12 µm film of poly (L-lactic-acid) (PLLA). The corrosion behavior of PLLA/MPS-coated Zn wires was studied in simulated body fluid using electrochemical impedance spectroscopy. An increase in the impedance from <1,000 to >15,000 ohms cm2 was recorded for Zn wire after its coating with PLLA. The PLLA/MPS-coated Zn specimens were implanted into the abdominal rat aorta to assess their biodegradation and biocompatibility as compared to uncoated Zn wires. PLLA/MPS-coated wires corroded at approximately half the rate as unmodified Zn during the first 4.5 months. A histological analysis of the biological tissue surrounding the Zn implants revealed a reduction in biocompatibility of the polymer-coated samples, as indicated by increasing cell toxicity and neointimal hyperplasia.