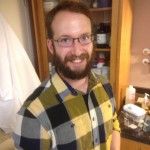 Congratulations to Jeff!
He was selected as the recipient of the Richard Shorraw Award. The Richard Sharrow Award is given to a student who has demonstrated a significant academic improvement through his career at MTU-MSE Department, and has demonstrated good citizenship within the department. Jeff received this award during the Senior Banquette last night (April 13).
He has also received the AFS Detroit-Windsor Chapter’s Past Chairman Scholarship.

This entry was posted in Notables, Team. Bookmark the permalink.