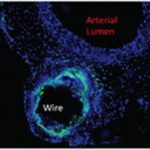 Although zinc and its alloys have many potential advantages, the inflammatory response has not been carefully examined in our research until recently. Using a modified wire implantation model, our close collaborators from Biomedical Engineering program led by Roger Guillory and Prof. Jeremy Goldman characterized the inflammatory response elicited by zinc and its alloys with aluminum. They found that inflammatory cells were able to penetrate the thick and porous corrosion layer that quickly formed around alloy implants. In contrast, a delayed entrance of inflammatory cells into the corrosion layer around pure zinc due to a significantly lower corrosion rate was associated with greater fibrous encapsulation, appearance of necrotic regions, and increased macrophage labeling. Interestingly, cell viability at the interface decreased among alloys with increasing alloying element, a trend associated with an increased CD68 and CD11b labeling and capsule thickness. Potentially, the shift to intergranular corrosion due to the aluminum addition increased the activity of macrophages. It was concluded that the ability of macrophages to penetrate and remain viable within the corrosion layer may be of fundamental importance for eliciting biocompatible inflammatory responses around corrodible metals. These findings were recently published in the article of the ACS Biomaterials Science & Engineering journal and entitled “Corrosion characteristics dictate the long-term inflammatory profile of degradable zinc arterial implants.”