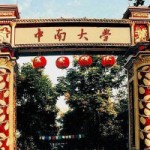 We employed atomic force microscopy to measure the colloidal interactions between silicon nitride cantilever tips and scheelite crystal surfaces in 1mM KCl solutions of varying pH. By fitting the DLVO theoretical model to the recorded force-distance curves, the surface charge density and surface potential values were calculated for three crystallographic surfaces including {112}, {101} and {001}. We found that the surface {101} was the most negatively charged surface, followed by {112} and {001}. The surface potential for {001} was only slightly affected by pH whereas surface potential for both {112} and {101} increased with increasing pH. Anisotropy in surface charge density was analyzed in relation to surface density of active oxygen atoms; i.e., the density of oxygen atoms with one or two broken bond(s) within tungstate ions located in the topmost surface layer. On a surface with a higher surface density of active oxygen atoms, a larger number of OH- is expected to adsorb through hydrogen bonding, leading to a more negative charging.
These findings were just published in Langmuir in the paper titled Surface Charge Anisotropy of Scheelite Crystals, which is the result of international collaboration between Central South University in Changsha (China) and the Surface Innovations research team.