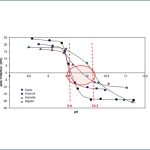 In our new report on characterization of surface properties of minerals, entitled Diffuse-Layer Surface Potentials of Colemanites Mined in Turkey and published in Physicochemical Problems of Minerals Processing, we examine the surface potentials of colemanites. The following is the abstract:
Colemanite crystal specimens were handpicked at Kestelek, Emet (Hisarcik, Espey), Bigadic mines in Turkey for characterization of their composition and surface potential. X-ray diffraction analysis revealed no differences in mineralogical makeup of the crystals, but elemental analysis indicated differences in the type of trace (<0.1 wt%) elements. Zeta potential measurements showed small differences in zeta potential values, with isoelectric points (iep) varying from about pH = 9.6 to pH = 10.2. However, no correlation was found between iep and the type of trace elements. Additionally, atomic force microscopy (AFM) was employed to measure the colloidal interactions between a silicon nitride (Si3N4) cantilever tip and colemanite crystal surfaces in 1 wt% colemanite-saturated aqueous solutions at three different pHs (8.4, 9.4 and 11). The Derjaguin-Landau-Verwey-Overbeek theory (DLVO) was applied to examine the AFM tip interactions with colemanite surfaces in an aqueous solution of colemanite saturated solutions. The results revealed attractive forces at pH = 8.4 and 9.4 and repulsive forces at pH = 11, confirming the location of an isoelectric point for colemanite specimens somewhere between pH = 9.5 and pH = 10.1. Theoretical analysis of the force curves using the DLVO theory allowed for assessment of both surface charge density and surface potential for colemanite specimens used in this study.