Effect of Proteins on Zn Corrosion 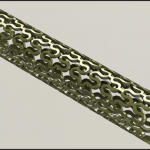 Understanding the surface interactions and reactivity of Zn-based biomaterials with constituents of physiological fluids such as proteins and ions is essential for an accurate evaluation of biomaterial corrosion initiation and progression. In our new contribution entitled Albumins Inhibit the Corrosion of Absorbable Zn Alloys at Initial Stages of Degradation published in Surface Innovations, the effect of the albumin proteins addition on the corrosion behavior of Zn and its binary (Zn-4Ag) and ternary (Zn-4Ag-0.6Mn) alloys is discussed. The corrosion behavior of Zn-based materials was studied using potentiodynamic polarization, electrochemical impedance spectroscopy, immersion tests and X-ray photoelectron spectroscopy. It was found that the addition of albumins largely affects the chemical composition, morphology and compactness of the protective films formed on biomaterials. A shift of the corrosion regime from localized to more general was observed in the protein-containing electrolytes. The proteins acted as corrosion inhibitors, reducing the corrosion current density and promoting passivation of the metallic surfaces. The increase in the corrosion resistance of the binary and ternary alloys is attributed to a selective Zn ion leaching that leaves the metal surface enriched with electrochemically more stable alloying elements.