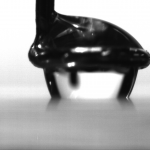 Water Droplet on a Polymer

In our new study described in article entitled “The most stable state of a droplet on anisotropic patterns: Support for a missing link,” surface tension and capillary forces were measured for water droplets in contact with anisotropic hydrophobic patterns made of microscopic ridges and grooves using a microbalance. Integrated with a CCD camera, the instrument allowed capturing of the synchronous images of a droplet during its spreading, compression, stretching and detachment. These images were used to analyze the evolution of a droplet shape and quantify its base diameter and contact angle in both longitudinal and traverse directions. The experiments confirmed that a water droplet spread preferentially along the longitudinal direction, on top of the ridges, following continuity of solid, and producing asymmetry in the drop shape. Switching the droplet wetting mode from advancing to receding causes the droplet to symmetrize its shape. It was found that the maximum adhesion between the droplet and hydrophobic pattern coincides with droplet base circularity and apparent contact angles of nearly identical values measured in longitudinal and traverse directions. These findings confirm that the most stable configuration for a liquid droplet on rough solid surface appears only when the droplet base is axisymmetric. It is also demonstrated that the Cassie-Baxter equation only pertains to the droplet in the most stable state, where the excess free energy is minimized.